Boston, MA – Immigrant activists and religious leaders from Massachusetts, Connecticut and Vermont have formed a human chain at the entrance of the Suffolk Detention Center in Boston to demand action from President Obama to end the suffering caused by deportation. The prison at 20 Bradston Street has been the site of an immigrant prisoner hunger strike in October 2013 and is currently embroiled in lawsuits protesting indefinite detention.

Those risking arrest include many directly impacted by deportation, including Alejandro Gonzalez, an undocumented man from Connecticut. “I participate in this civil disobedience during Holy Week to let those in high positions in the government know that we reject the laws that criminalize our people, only for not having a piece of paper,” says Gonzalez. “Although I know I face being deported too, eleven million people need us to act.  For that reason, the word ‘fear’ is not in my vocabulary. On this holy day, we remember that we must make sacrifices to help our community.” END_OF_DOCUMENT_TOKEN_TO_BE_REPLACED Danilo Lopez, the Mexican farm worker who became a cause célèbre for Vermont’s undocumented farm laborers, won a reprieve in his deportation case today.

U.S. Customs and Immigration Enforcement granted Lopez (pictured) a “stay of removal” that will allow him to remain in the country at least another year. Lopez has been under threat of deportation since July 5, stemming from a 2011 traffic stop in which he and another farm worker here illegally were stopped by state police in Interstate 89.

Burlington-based advocacy group Migrant Justice issued a press release announcing the news. In it, Lopez is quoted as saying, “I’ve gotten such tremendous support during this campaign that we’ve made ICE change their mind. I feel very fortunate to have so much support — in particular from my community of farm workers who told me: ‘We’ve got your back. We’ll fight with  you.'” 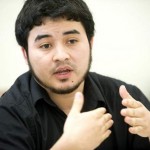 Danilo Lopez had his moment in the sun Wednesday, describing a nearly two-year struggle that began with the car in which he was a passenger being stopped by a state trooper and culminating in Gov. Peter Shumlin’s signing of a new law creating a new type of driver’s license available to people in the country illegally.

“We left fear behind and we left the shadows to come out and organize for our rights,” said Lopez, 23, who has worked on a Charlotte dairy farm for much of his nearly six years in Vermont.

But Lopez may never be a legal Vermont driver himself. His appeal of a deportation order was rejected last week; he’s been ordered to leave the country by July 5.

After the trooper who stopped his driver for speeding turned Lopez and a companion over to U.S. Immigration and Customs Enforcement, Lopez became a leader among the estimated 1,500 workers who provide crucial labor on Vermont dairy farms but who are in the country illegally.

Working with the advocacy group Migrant Justice, Lopez got a taste of the American dream — the part about being able to go to the halls of power, in this case the Vermont Statehouse, and petition the government for a redress of grievances.