In the spring Ramon Mendoza Pascual was a key leader in the hunger strike at the Northwest Detention Center in Tacoma, WA. He went without food for more than 50 days, almost all of those days spent in solitary confinement under threat of forced feeding. His leadership and bravery, and that of others, inspired hunger strikes and other actions across the country and led Congressman Adam Smith to introduce legislation to limit abuses in detention centers.

On September 9, after a year of separation from his wife, Veronica Noriega, and their three children, he faces the hearing that will determine whether he will be deported or reunited with his family. His wife Veronica will now stand outside the walls that have separated them for so long to stage her own hunger strike – a strike to reunite her family, and all families torn apart by the deportation machine. She is being supported by the hundreds of people that have responded to the courageous actions of the hunger strikers. END_OF_DOCUMENT_TOKEN_TO_BE_REPLACED

“I had a productive conversation with the DHS Secretary Jeh Johnson.  I spoke with him about my recent visit to the NWDC and made sure he was fully aware of all the concerns that were brought to my attention by the detainees I met with, their friends and relatives, and advocates in the community.  Secretary Johnson has visited a detention facility in Texas and plans to visit more in the near future.  I asked that he continue to visit facilities and invited him to come see the NWDC in Tacoma in hopes that these visits will lead to a review of policies at detention centers.

“Additionally, we spoke about the issue of deportation.  I expressed my concerns about the rising number of immigrants being deported and how this has a devastating impact on families in our community.  Secretary Johnson understands these concerns and ensured me that DHS is reviewing all deportation policies, as the President announced this week.  I have a great working relationship with Secretary Johnson from his tenure at the Defense Department, and I look forward to continuing working with him in his new capacity on this issue.” 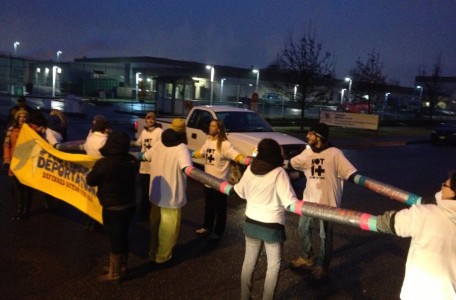 A dozen undocumented Washington State residents and supporters have locked themselves together just moments ago at the entrance of the Northwest Detention Center as part of the national campaign demanding that the President stop deportations and expand deferred action for all. Read more
Search the Blog
Video: Accompany the Struggle to Say No More Deportations
Click to Stop their Deportations