Sometimes tactics and strategies are planned far in advanced, developed and premeditated, other times it comes from a place that cannot be designed. In this case it comes from a mother’s will and community desperation, an expression of suffering and willingness to do anything to keep a family together. Most undocumented families in the United States have already lived through the risks of getting here and the dangers of the work we do. We’ve lived through days of unplanned hunger and now accept it willingly.

Starting on Monday February 17th on Presidents Day members of our communities will have our last meal and start a hunger strike, to demand Not One More Deportation. We will be in Front of the Phoenix ICE office 2035 N Central Ave Phoenix. The purpose of this Hunger Strike is to demand the release and halt the unnecessary deportation of our loved ones. We also wish to expose the most important piece missing from this debate, the human cost caused by the extraction of members from our community. 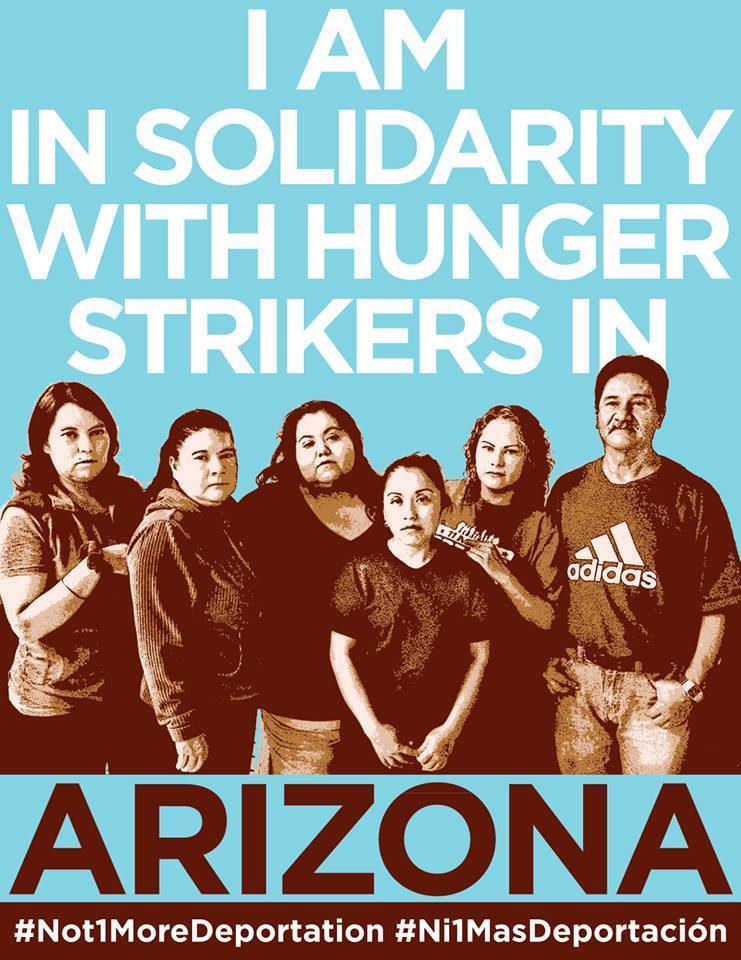 This hunger strike doesn’t begin with the blessing of someone famous or anyone of any more importance then the rest of us, but it comes from the authenticity of the pain that exists in our communities, mothers, fathers, children, nieces, nephews, grandparents, friends, partners and allies who join in exposing the devastation of this country’s deportation policies.

We’ve watched the debate in public and suffered in private. We have gone to bed with our arms empty, aching for our loved ones, and now it is time to make that suffering known to the world. Anselma’s son, Elder, has been in immigrant detention for two years and is at the brink of deportation. It was her who in a community meeting said she had nothing else left but to sacrifice herself and health for her son and to end all the suffering in our communities.

The purpose of this Hunger Strike is to demand the release and halt the unnecessary deportation of our loved ones. We also wish to expose the most important piece missing from this debate, the human cost caused by the extraction of members from our community.

It will be a joint effort from families on the outside and detainees on the inside, detainees who not only risk their health by not eating but the punishment they will receive by guards while on Hunger Strike inside detention. We have no one but ourselves to look too, this immigration debate continues to be a political game in which both parties are content with the status quo that they take to the polls for elections, cements a permanent underclass and creates a constant flow of profits.

Politicians may tell us to be patient. Advocates may say that our tactics threaten the debate. But if there is not room for us, mothers who miss our sons, at the center of this conversation, than we hope our empty stomachs change that conversation.

As long as we keep our suffering to our kitchen tables and half empty beds, they will keep their policies the way they are. Our sons’ imprisonment hasn’t been enough to get them to act. We hope our hunger strike will. If not, what happens to us will be on their hands.

Join us, and support the Hunger Strike for Not1More Deportation! Sign the petition here. Thank you.

Lourdes Hernandez was on her way home from a evening Christmas party with her husband and three children when they were stopped by the police. Lourdes and her two eldest daughters have done everything they can to defend J Cruz and bring him home: working extra hours to pay hundreds of dollars for lawyers, speaking out against the wrongful arrest, going door-to-door in their neighborhood for petitions to ICE. Seeing her 19 year old daughter working 80-hours a week and fearing that her youngest son will grow up without a father, Lourdes has now decided to fast for 14 days to bring her husband home. Lourdes explains, “My husband has been in detention for over 13 months. My children suffer every day that they are apart from him. My family is not complete without him, I need him home now. I am fasting so that everyone knows that I will put my body on the line to keep my family together.”

Hermina Gallego and her family, including her daughter Rosy and her sister Margarita, left Mesa for Mexico when Hermina’s father was given one month to live. Hermina couldn’t abandon her father on his deathbed. But in Mexico, the family faced violence and persecution, the reason they left in the first place. Returning across the border, Rosy and Margarita were detained. Rosy, a 20-year old DREAMer, is now in Eloy Detention Center, where lawyers say she could be for years. Hermina explains, “I’m fasting for my daughter because she has been in detention for over 5 months. “My daughter is sick and she is not getting the proper treatment she needs. I am fasting because every day that my daughter is in detention is a day that her health is in danger, if I don’t do anything she can die.”

Anselma Lopez has been living in in the United States for 11 years. She and her husband have three children. Elder Lopez, her oldest son has been in Eloy Detention Center for over two years. For the last 2 years, Anselma has been organizing with Puente and advocating for the release of her son. Anselma has petitioned for the release of her son and fears that her son will die of he is sent back to Guatemala. “My son has been in detention for almost 3 years, I am fasting to bring him home. He should not spend another year in detention, his children and family need him home.”

Jovana Renteria is the legal director for the Puente Movement. Jovana has been a staff of Puente for over 5 years and has been committed to helping reunite families. Jovana is going to fast for 14 days because she has witnessed the suffering that families and detainees endure due to the broken immigration system. As an ally, Jovana believes that she must fast with the families to show her support and let the families know that they are not alone and to reaffirm that the community stands with them.

Alejandra Sanchez has been living in Arizona for 13 years. She is a mother of 5 children, 4 of them DREAMERS and one a United States Citizen. Alejandra is a DREAM Mom in Arizona which is a national organization dedicated on organizing undocumented mothers and families. Alejandra has actively been organizing undocumented mothers and supporting the organizing efforts of her children for the last 3 years. Sanchez is a representative of the national DREAMERS Mothers. Alejandra and her husband were stopped and arrested in by Border Patrol last month where they exercised their rights and were released within 8 hours. Alejandra has chosen to participate in the hunger strike because she is representing all the mothers who have children in detention centers and are too afraid to come out and fight for their freedom.

Find out more about their loved ones and support them by signing the petition and calling ICE in support of keeping these families together.