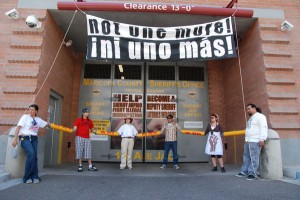 Protestors chain themselves to Sheriff Arpaio’s jail to prevent a raid in July, 2010 under banner of “Not One More!”

As the immigration debate continues on, #Not1More enters the discussion from the place that touches people in concrete ways and can offer tangible relief. By collectively challenging unfair deportations and criminalization through organizing, art, legislation, and action, we aim to reverse unjust policy, build migrant power, and create immigration policies based on principles of justice and inclusion.

NotOneMoreDeportation.com started as a project of NDLON in April, 2013 and transitioned to an independent campaign in early 2015 after the President’s historic announcement of an expansion to deferred action.

Growing from the global call of AltoArizona to condemn institutionalized racism, the coming out of the shadows as undocumented and unafraid led by immigrant youth, and from the courageous No Papers No Fear Ride for Justice (aka Undocubus), #Not1More accompanies and galvanizes the determination of millions of immigrants who have endured suffering and now are exercising the right to remain in the place they call home.

In recent years, the terms of the immigration debate have been poisoned and a crisis created as deportations, incarceration, and criminalization of immigrant communities has escalated at unprecedented rates. But at the same time record numbers of people are refusing to be victims and instead are drawing an entirely different picture by taking a stand for themselves, for their families, for our communities, and for all of us.

#Not1More weaves together all of our voices in a central location so that local efforts to stop deportations and build community are strengthened and accompanied by cultural creations that illustrate the ugliness of criminalization and the beauty of our communities.

Contribute your own art to the project | Sign to stop deportations