Seven undocumented Alabama residents and supporters locked themselves together to block the entrance of the Etowah County Detention Center as part of the national #Not1more campaign demanding that the President use his executive authority to stop deportations. The blockade is currently taking place at 827 Forrest Ave, Gadsden, AL 35901.

The Etowah County Detention Center is part of the largest immigrant detention infrastructure in the world and today, the U.S. government locks up and deports more immigrants than ever before.  As Congress stalls on immigration reform, Alabama families and families across the country continue to pay the price.

The Obama Administration has been deporting immigrants at a rate of over 1,000 a day, and is set to make history in the coming days when it hits the 2 million mark on deportations.  Two million is too many.

Those participating in the action are members of the Alabama Coalition for Immigrant Justice and believe that the President has the legal authority, moral obligation, and political imperative to stop separating families by taking administrative action.

Since the 2011 passage of HB56, the harshest anti-immigrant law in the nation, immigrants in Alabama have organized their communities around the state to defend their families against deportation. To follow their work, and learn more about the Alabama Coalition for Immigrant Justice, find them on Facebook, Twitter and Instagram, or at www.acij.net

Teresa Flores from Alexander City, AL: “I’m risking arrest today to tell the President loud and clear to stop deportations. We all have rights, regardless of where we come from and we deserve dignity and respect.”

Carlos Ramos from Alexander City, AL: “I want to say that we cannot do this alone and we need your help. I’m doing this to tell President Obama that he hasn’t kept his promise of immigration reform, and that he needs to halt deportations and investigate the Etowah Detention Center given that they are inhumane in their treatment. It needs to be closed.”

David Comparan from Dothan, AL: “I personally know the feeling of being separated from my family by deportation because my father was deported…. I’m here to say that the President can and needs to stop deportations today.”

Evelyn Servin from Russellville, AL: “I decided to take action today because I am no longer afraid to speak up. My family and I have endured the pain and emotional trauma family separation brings, and I am here to tell President Obama to stop the deportations. I will continue to work tirelessly until no child is torn from his father and no husband is taken away from his wife like my husband was taken away from us. Alabama is no longer afraid and will not continue to live in the shadows anymore.”

Gabriel Machabanski from Birmingham, AL “My immigrant parents and grandparents were not so different from those who ICE and local police indiscriminately target today. I am risking arrest because I believe one deportation causing indescribable pain to a family is one too many. To expose myself to the possibility of arrest is a small act of solidarity with all those who continue to live with immense courage and dignity despite being forced to live in fear. After two million deportations on this administration’s watch, enough is enough!”

Monica Hernandez from Atlanta, GA “I’m participating in this action because I believe I have a moral and ethical obligation to speak out against the 2 million deportations that have torn apart so many familes and have ravaged so many of our communities. Three years ago I witnessed the crisis caused by HB56 and had the honor of accompanying many of Alabama’s leaders as they organized to fight back against the most draconian ant-immigration law in the country. Today I stand in solidarity with those same leaders as we join our sisters and brothers across the South and the entire nation and say, “Not 1 more deportation!” 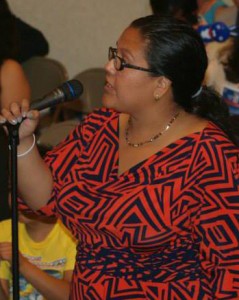 Gwendolyn Ferreti Manjarrez from Tuscaloosa, AL “I am tired of having my community criminalized because we are immigrants. I am tired of living with the fear that my family or any family can be torn apart at the seams for living our everyday life. We are increasingly criminalized and our people are unnecessarily questioned, harassed, detained and deported because of Congress’s and the President’s unwilingness to stop this injustice. Our communities are hidden away in jails like Etowah Detention Center, and I’m part of the action because I refuse to have our pain ignored.”