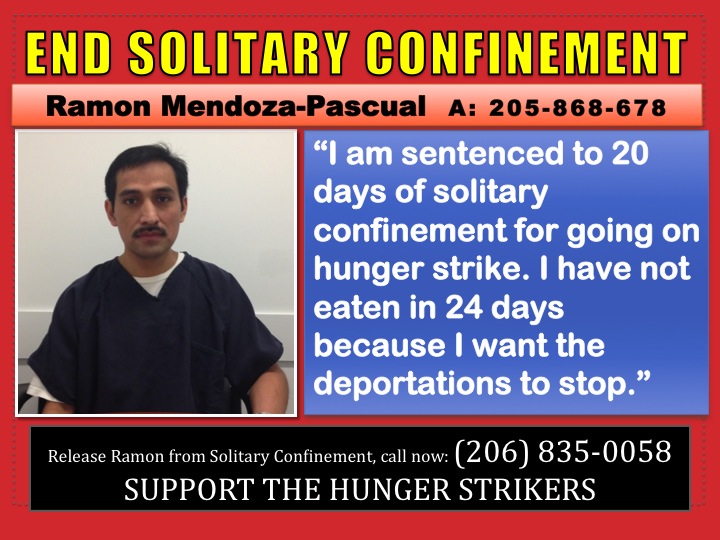 Take Action to get Ramon Out of Detention. Please call the immigration offices at 206-835-0058 to support.

Suggested script: “Hello, I’m calling because I am very concerned about the placement of Mr. Ramon Mendoza Pascual (A 205-868-678) in solitary confinement. It seems like retaliation for his organizing to highlight the conditions inside the center. Please stop retaliating against detainees, and take Mr. Mendoza Pascual out of solitary confinment”

Jesus Gaspar Navarro ended his 25-day hunger strike Tuesday morning with a full breakfast. An hour later, after speaking  on air on Spanish language 1360 am about the strike, he was removed from medical isolation to solitary confinement.  His administrative segregation order cited risk to self and the facility and participation in the hunger strike as reasons for his isolation. The conditions of isolation are not healthy for someone recovering from a nearly month-long fast.

Today Ramon Mendoza Pascual, who was held in medical isolation for two weeks, had a hearing on charges stemming from the fast. In the hearing the same ICE officer acted as translator, witness against him and adjudicator. He was convicted of inciting a group demonstration. Mr. Mendoza Pascual was sentenced to 20 days in solitary confinement. The conditions include near total deprivation: 23 hour a day lockdown with no human contact (one hour a day of solitary time in the prison yard), no use of telephone, no access to commissary account items, and no access to television or written materials.

Army vet Hassall Moses remains in isolation for advocating a work stoppage for work that is compensated at $1 per day and that ICE and GEO allege is voluntary.

Increasingly experts are coming forward with evidence that isolation is torture. In a recent New Yorker Magazine article public health researcher Dr. Atule Gawande summed up all the research: “simply to exist as a normal human being requires interaction with other people.”

A 16-year resident of the US, Mr. Gaspar Navarro is sorely missing his large family, all U.S. citizens – a wife,  five children, and two grandchildren born since he was detained.  Ramon Mendoza Pascual and his wife of 13 years, Veronica, have three children, ages 12, 10, and 5. Ramon first came to the United States 11 years ago, in 2002, and works as a carpenter, finishing homes and hospitals. Before being detained, Ramon was a significant source of support to his family, and his wife now works three jobs seven days a week to make ends meet.

BREAKING: Chicago Shuts Down ICE at Detention Center
500 People Rally Outside Detention Center; Hunger Strike Continues with Ongoing Use of Solitary Confinements
Comments
Search the Blog
Video: Accompany the Struggle to Say No More Deportations
Click to Stop their Deportations