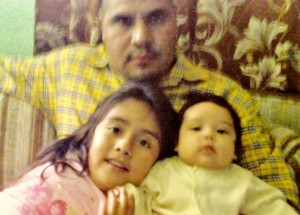 Update: On 9/17/14, Aristeo signed his self-deportation order, after one year incarcerated away from his family

Aristeo Acosta Acosta (A#206-087-767) has lived in Phoenix for 12 years, caring for his family and working hard to support his children. He fell in love with Lucia Garcia, married, and had two U.S. citizen children, Leslie, 9, and Rubia, 3. Together, Aristeo and Lucia are raising their children with the support of Aristeo’s big, loving family in Arizona.  Aristeo should be home with his children and relatives, instead of sitting in detention, fearing deportation.

Aristeo got caught up in ICE’s dragnet after a minor DUI charge triggered an ICE investigation. Aristeo has already served time for his mistake and should be home now. He has no other criminal charges and no prior deportations. Many of his relatives are U.S. citizens, including his children, a naturalized U.S. citizen grandmother, and aunts, uncles, and cousins who were all born here. Aristeo would be a U.S. citizen as well had his parents crossed with their mother decades ago. Deporting Aristeo would separate him from everyone who depends on his love and support.

Tearing a hard-working man – a loving son, grandson, cousin and father – from his family is cruel and inhumane. Family unity is a human right!

Tell ICE to let our community live together and in peace. Free Aristeo now!

Father of 2 U.S. Citizens in Detention for One Mistake: Free Aristeo!

I am writing to ask that you immediately release Aristeo Acosta Acosta (A#206-087-767) and cancel his case. Aristeo first entered the U.S. in 2002. He has no prior deportations. The only charge on his record is for a DUI, a mistake for which he has served his time. Aristeo and his family should not have to continue suffering for this mistake.

Aristeo and his wife, Lucia Garica, have two U.S. citizen children, Leslie Acosta, 9 and Rubia Acosta, 3. Aristeo’s whole family is here, including his U.S. citizen grandmother, a U.S. citizen aunt and uncle, and several U.S. citizen cousin. For the last 12 years, Aristeo has been building a life here in the U.S. and he should not be forced to leave behind his entire family, including his two young children.

Tearing a hard-working, loving man – a son, grandson, cousin and father – from his family is immoral and cruel. I ask that you release him immediately and close his case.

I await your response.