While Cyndi Was Walking 100 Miles to See Pope Francis, ICE Took Her Husband And Could Deport Him At Any Moment 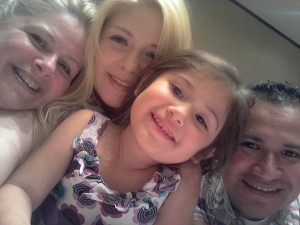 Elmer Chavarria came to the U.S. almost 20 years ago escaping extreme violence and threats to his life in Guatemala. ICE is currently holding him in custody at the Calhoun County Correction Center in Battle Creek, despite a debilitating medical condition and denying proper care.

According to the doctor, two extruding herniated disks are pinching Elmer’s spinal cord, causing severe back pain and numbness down his left leg and in both feet. The doctor has reported that Elmer “risks permanent nerve damage, chronic pain, and disability.”

Since his detention, ICE has taken away his prescription medication, and even though he is in extreme pain, will give him only small doses of Ibuprofen and will not let him see a neurosurgeon.  Elmer’s wife Cyndi is on a fast until her husband is released.

In 2007, Elmer came to Grand Rapids, Michigan. where he met and then married Cyndi, his U.S. citizen wife. Together, they have a U.S. citizen daughter, Celia Justice who just turned 6, and he is also a step-father, helping raise Cyndi’s other daughter Celeste Elise, who is in high school.

During a routine police call, Elmer answered the door. Without knowing his name or if he lived there, police assaulted and injured Elmer’s back. They said that he was in the way of their entering the home and arrested him for “obstructing justice.” Out on bond, Elmer went to a doctor, and then as his symptoms worsened, he went to the ER where another doctor gave him muscle-relaxants and pain medication and advised him to pursue surgery immediately. But then ICE intervened and arrested him.

As ICE was detaining Elmer, Cyndi was participating in the 100 Women 100 Miles Pilgrimage, walking 100 miles from Pennsylvania to Washington, DC to welcome Pope Francis to the US with a call for compassion and dignity for immigrants and families liker hers. After the pilgrimage, she returned home to find that Elmer was in urgent need of medical care and detained in a facility which denied him that care.

Elmer’s family is requesting that ICE grant him a humanitarian medical parole so he can receive the much-needed medical treatment, and also grant him as prosecutorial discretion. Please support by sending an e-mail to ICE in support of Elmer.

Please sign below to send an e-mail to ICE and help return Elmer to his family so he can receive life saving medical treatment.
Read the message to the Detroit ICE Office

I am writing with concern about the case of Mr. Elmer Chavarria (A 077-444-641) currently held in ICE custody at the Calhoun County Correctional Center, Battle Creek, Michigan. Mr. Chavarria has a U.S. citizen wife, a U.S.citizen daughter, age 6, and a U.S. citizen step-daughter, age 17, all of whom depend on him for love and support. I am writing to support the request for his release as a humanitarian measure.

Two extruding herniated disks are pinching Mr. Chavarria’s spinal cord and his condition is rapidly deteriorating, causing him to suffer severe back pain, complete numbness down his left leg and in both feet, and decreasing loss of control over bathroom functioning. According to doctors, Mr. Chavarria needs to see a neurosurgeon immediately.

He has deep ties to his community, volunteers regularly to help children, seniors and his retired US Military veteran father-in-law. While his wife Cyndi was participating in the 100 Women 100 Miles Pilgrimage to welcome Pope Francis with a call for compassion and dignity for immigrants, officers from ICE arrested and detained her husband, Elmer Chavarria.

According to his testimony, since he was detained, ICE took away his medication and will only give him small doses of Ibuprofen. For these reasons, I support Mr. Chavarria’s family’s request that ICE grant him prosecutorial discretion and a humanitarian medical parole so he can receive the medical treatment he needs.