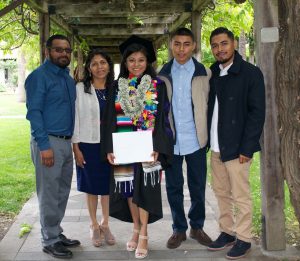 Lizbeth Mateo is an undocumented law graduate and activist. She came to the United States with her family at that age of 14. Lizbeth was one of the first undocumented youth to risk deportation, to demand the immediate passage of the Dream Act, when she was arrested for stating a sit in inside Senator McCain’s office in 2010.

In 2013 Lizbeth left the country briefly, traveled to Mexico as part of the Bring Them Home campaign, and returned with eight other youth. The “Dream 9,” as they came to be known, demanded to be allowed to return home to their families and called for immediate family reunification. Lizbeth was able to returned home just in time to attend Santa Clara University School of Law, from where she graduated this past May.

Since Lizbeth applied for DACA in October 2015, USCIS has sent Lizbeth two letters of intent to deny due to her participation in the Bring Them Home campaign. Lizbeth has received the support of several members of Congress, the Dean of Santa Clara Law, law professors, organizations, and community members.

Click here if you can’t see the petition below. You can also sign as a community organization here, and if you are an educator or an attorney, you can sign here.