share
Please sign below to join Justicia Migrante / Migrant Justice and the #Not1More Campaign in urging the Boston ICE Field Office to use prosecutorial discretion to stop Victor’s deportation. 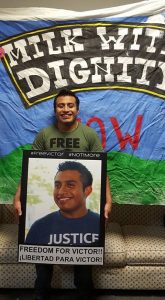 Victor Diaz is a dairy worker and leader of the Vermont based human rights organization Migrant Justice. Victor became a community leader after his wages were stolen on a Vermont dairy farm where he lived in a run down camper with a leaky roof and no running water. He organized his co-workers to stand up to their abusive employer–demanding and winning their stolen wages.

This experience inspired Victor to help build and launch the Milk with Dignity Program calling on large corporations to source their milk in compliance with the human rights of farmworkers.

Victor helped lead the campaign to successfully secure a commitment from Ben & Jerry’s to join the Milk with Dignity Program. He has played a crucial role, as a farmworker spokesperson on Migrant Justice’s negotiating team, working to hash out the details of the new program. Victor was featured in a 2015 New York Times article for his outstanding community leadership.

But on April 21st, as Victor was exiting a restaurant after a Mexican cultural event, undercover agents from Immigration and Customs Enforcement (ICE) arrested him and took him into custody.

Victor came to the attention of ICE in 2015 after he was pulled over while giving a ride to a co-worker and charged with driving under the influence. Following the arrest, Victor paid a fine and attended the court-mandated counseling sessions. He has taken all the necessary actions to have his license restored and has continued to drive without incident. In addition, his organizing shows that he is an outstanding community leader and human rights champion.

Victor has already received the support of pastors, labor leaders, university students, and hundreds of his fellow farmworkers. He is an important figure in his community and his continued detention does harm not only to Victor but to the farmworker movement for human rights that he has led. In fact, it was thanks to his organizing that Victor was released from detention pending his immigration court.

Even though he has been released, Victor still could face deportation. Please sign below to show your support to stop Victor’s deportation.