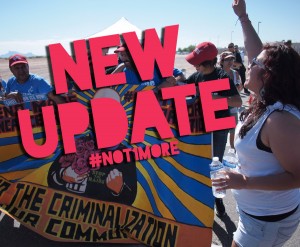 To continue to confront and transform the post-executive-action reality, we’re excited to announce that Marisa Franco, B. Loewe, and Tania Unzueta will form a new entity to take the #Not1More campaign to the next level.

Born out of the fight in Arizona against SB 1070, the civil disobedience and the coming out as unafraid strategies of undocumented youth, and developed by the National Day Laborer Organizing Network, a goal of #Not1More has always been to build an independent, flexible and grounded force in the immigrant rights movement to expand the boundaries of what’s possible in the rigid, politically-encumbered policy context.

Going forward, NDLON will remain an integral part of the #not1more campaign, but now more than ever we believe we need additional organizations dedicated to achieving real justice and challenging the status quo.

#Not1More was, and will continue to be, an open source campaign rooted in principles of self-determination that provides a vehicle for diverse efforts, individuals, organizations with the shared goal of achieving a world with no more deportations.  The new entity will become an independent hub to anchor this work.