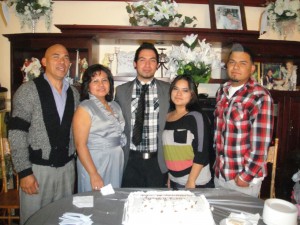 Update 6/28/13: Edgar and Erick are home with their families, thanks to community support.  Their deportation cases are still open, however, so stay tuned on ways you can help keep them home!

These two young brothers (ages 25 and 21) were arrested a month ago, for a small lapse of judgment, resulting in a marijuana possession charge and another charge for owning a car in which a weapon was found. The weapon DID NOT belong to either of the brothers, but was left in their car by a friend.  For someone with papers, this same mistake would mean a slap on the wrist, time served, no big deal.  For Edgar and Erick, it could mean deportation.

The plea agreement they both accepted says that their charges will be erased from their records in a year and a half, making them DACA-eligible.  The judge saw potential in them and so is willing to give them a second chance.  However, for them to get their work permits in a year, ICE needs to let them go today!

Erick has a U.S. citizen wife and an infant daughter. They deserve a second chance, to make amends for their mistake, and to be able to pursue their dreams, with their family, at home, where they belong.