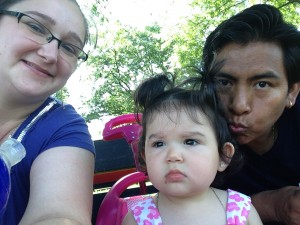 Horlando Tellez Tepenohaya came to the U.S. at the age of 16 and graduated from Senn High School in Chicago.

He has been married to Ajsa Tellez Blazevic, a war survivor and refugee from Bosnia-Herzegovina, for 12 years. Together, they have a 2-year old daughter, Emily.

He was caught at the border after a few months ago Horlando returned to Mexico on bad advice from a notario, and was banned from the U.S. for 10 years. But while Horlando and his family were in Mexico, they were victims of a robbery during which Horlando was threatened with a gun, and Emily was briefly pulled from her mother’s arms by an assailant. At that moment they decided to go back to the U.S., where they could raise Emily safely. But on his way back he was stopped at the border and put in immigration detention. 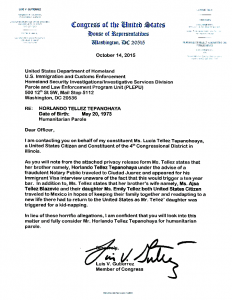 While Horlando has been in detention his family has suffered greatly. His wife, Ajsa, has been diagnosed with depression and is now taking medication. She has also had to seek work, where she gets paid $1,600 month. Every month she has to chose between paying their mortgage, or risk losing the house to be able to pay the bills and take care of her daughter.

Horacio and his family are from Chicago, Illinois, and before he was detained, they received support from community organizations like the Illinois Coalition for Immigrant and Refugee Rights, and elected officials like IL Congressman Luis Gutierrez and Chicago Aldermen Carlos Ramirez-Rosa, and Deborah Mel.

Please sign to urge the ICE office to grant parole to Horlando and allow him to live with his wife and daughter.

ICE has the option of granting him parole while he fights his  deportation case. Please join Horlando, Emily and Ajsa, Grassroots Leadership, and the #Not1More campaign by sending an e-mail to ICE below.
Click here to see letter to ICE office

I’m writing to ask for the parole of Mr. Horlando Tellez Tepenohaya (A 207 057 529). Horlando is currently be detained at the West Texas Detention Center in Sierra Blanca, Texas.  Mr. Tellez attempted to return to the United States after being separated from his wife Ajsa Tellez Blazevic and their two-year-old daughter Emily, both of who are U.S. citizens.

Mr. Tellez came to the US at age 16, and graduated from high school in Chicago. He married Ajsa in 2003. Ajsa herself came to the US in 2000, having herself survived years of strife and trauma in her native Bosnia-Herzegovina, including separation from her own family.

I understand that Mr. Tellez returned to Mexico on bad advice from a notary public and received a 10 year bar on re-entering the U.S. But while Mr. Tellez and his family were in Mexico, they were victims of a robbery during which Mr. Tellez was threatened with a gun, and where his daughter was pulled from her mother’s arms by an assailant. At that moment they decided to go back to the U.S., where they could raise his daughter safely.

I urge you to  grant parole to Horlando and allow him to live with his wife and daughter while fighting his immigration case.

North Carolina Father of 4 Detained by ICE at Probation Appointment
Take Action to Stop Loving Father From Becoming A Victim of Enforcement!
Comments