Juan Martinez-Garcia is a community leader and a member of the Georgia Latino Alliance for Human Rights who will be fighting his deportation in court this July 17.

Over the last 2 years, Juan has been part of the core group of people organizing for the rights of immigrants in the state of Georgia, including the April 5th national day of action “Walk with Us/ Camina con Nosotros” and the April Hunger Strike that took place in Washington, D.C. urging action against harmful enforcement practices in our communities.

On July of 2012 Juan was pulled over by a police officer in Cobb county, for allegedly failing to stop at a red light, and was arrested for driving without a license. Although these were his only charges, he was placed in deportation proceedings. Juan was released in response from our advocacy, but he now has to appear in court on July 17, 2014.

Juan has lived in the United States for 15 years, he has no criminal record beyond traffic tickets for driving without a license he cannot get, he is a responsible husband and neighbor, and he has been a civil rights leader in the state of Georgia.

Please sign below to tell ICE to stop pursing Juan’s deportation and close his case. 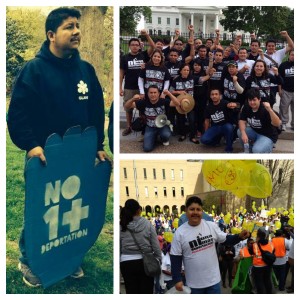 Letter to ICE Office of Chief Counsel in Georgia

I am writing because I am very concerned with the deportation of Mr. Martinez Garcia A# 205.502.538.

Mr. Martinez-Garcia has lived in the United States for 15 years, he has no criminal record beyond traffic tickets, he is a responsible husband and neighbor, he has had no prior contact with immigration authorities, and he has been a civil rights leader in the state of Georgia. As a member of the Georgia Latino Alliance for Human Rights (GLAHR) he has also made significant contributions to his community through education and civil advocacy projects.

As a member of the community I would support the positive exercise of prosecutorial discretion in the case of Mr. Martinez-Garcia. I urge you to take into consideration the significant number of positive factors in his case, and close his deportation.