Cambodian Immigrant Asks ICE for Compassion to Save Brother’s Life

share
Touch is resigned to be deported, even though he has lived in the US since he was 6 years old. But before that happens, he is asking ICE to give him a chance to save his brother’s life by letting him donate his kidney, on which his life depends.

Touch’s brother has been living with kidney failure and undergoing dialysis for close to 2 years and needs a kidney transplant.

All he is asking from ICE is the opportunity to take a test to see if he is a match, and grant him a temporary stay to donate his kidney. Nevertheless, ICE has refused to let Touch get tested, and has told him he would be deported by the end of August 2014. 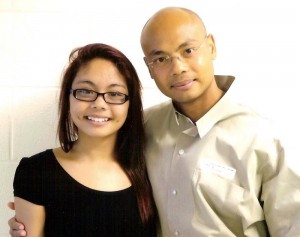 Touch Hak is a Green card holder who fled the Khmer Rouge genocide in Cambodia in 1979 with his parents. After 6 years in a refugee camp in Thailand, the family was resettled in Stockton, CA and has lived in the U.S. since then. When Touch was 11 and a fifth grader at Cleveland Elementary, he was in the building when a lone gunman walked into the schoolyard and killed five Southeast Asian refugee children.

Touch found it difficult to recover from this trauma, and began to struggle in school. In 2005, after his daughter was born, Touch was charged with a crime: possession with intent to distribute. His public defender advised him to plead guilty, without understanding that a guilty plea could later result in his deportation. He served his time, but now he is slated for imminent deportation to Cambodia.

Sign here to support his request for compassion from the ICE Field Office in San Antonio, and allow Touch to complete the blood test, and have a chance to save his brother’s life.
E-mail to Immigration and Customs Enforcement

I am writing as  a concerned member of the community regarding the case of Mr. Touch Hak (A 027 750 644). Mr. Touch is seeking a temporary humanitarian stay of removal and release from ICE custody so that he may undergo medical procedures to donate a kidney to his brother, Puthy Hak. Hak’s  parents and brother, all of whom are U.S. citizens , ask that Touch’s deportation be delayed until he is able to undergo a blood test to determine if he is a match with his brother Puthy. If so, they will ask for a 18-month humanitarian stay of removal to allow Touch to donate his kidney before he is deported to Cambodia.

The immediate deportation of Mr. Hak would cause extreme hardship and suffering to his entire family. His brother Puthy has suffered from kidney disease for 14 years, and has struggled the last 18 months with total kidney failure, requiring him to receive dialysis treatment three times a week. Puthy has been approved for a transplant at UCLA Medical Center, but has been on the waiting list since last October, and has no other potential donor within his family. Doctors are unsure how long he will live without a successful transplant.

I am aware that Mr. Hak was convicted of a drug crime in 2006, and served 8 years in prison. However, Mr. Hak’s criminal record makes his family and him no less deserving of compassion and humane treatment. He and his family are not asking for his deportation case to be closed — only for enough time so that Touch can give his brother Puthy the ultimate gift of life before he is deported.

I support Mr. Hak’s request for release and I urge you to take compassion and allow him to temporarily stay his deportation so that he may save his brother’s life.