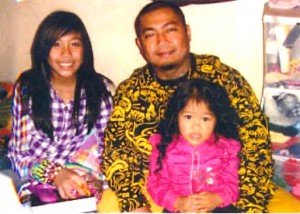 Leach Chhoeun came to the United States as a refugee from Cambodia when he was 4 years old, after most of his family was killed during the genocide.

Like other refugees, Leach’s family was resettled in an impoverished neighborhood plagued by gang violence, poor schools, unemployment, and a lack of any resources for new immigrants.  Cambodian youth were picked on and began joining together for protection.  By elementary school, Leach was in a gang.In 1996, at the age of 18, Leach was arrested for assault with a firearm following an incident in which his cousin exchanged gunfire with a rival gang.  Leach was present but unarmed, no one was injured in the incident, but Leach served 1 year in state prison.  Weeks after his conviction, Congress retroactively designated it as an aggravated felony stripping the judge of authority to consider rehabilitation.Leach decided to leave gang life in 1999, months after his brother was mistakenly targeted and killed in a drive by shooting. He married his wife of 19 years and has focused on raising his two daughters, 14 and 6 years old.  His father and both sisters tragically died of Lupus.  He is the last surviving relative and primary caretaker of his mother who suffers from major depressive disorder, memory loss, and seizures.In April 2014, ICE arrested Leach seeking to deport him to Cambodia for his 1996 conviction.  As he seeks to reopen his case, we call on ICE to release Leach from detention and reunite him with his family.

UPDATE: Unfortunately Leach Chhoeun was deported. His case was strange, because ICE had granted him an emergency stay of removal, only for him to be deported 2 days later. His legal counsel and advocates are planning potential next steps for his campaign.
E-mail to San Francisco Field Office

I am writing in support of Mr. Leach Chhoeun (A025 264 805) currently in detention facing removal to Cambodia.

Mr. Chhoeun came to the United States as a toddler fleeing the genocide in Cambodia. The Department seeks to deport Mr. Chhoeun for a crime committed in 1996 when he was eighteen years old. Since then, Mr. Chhoeun has rehabilitated himself, is a loving husband to his wife of nineteen years, a parent to two young children, and the primary caretaker and sole surviving relative of his mother.

We ask that the Department release Mr. Chhoeun from custody and reunite him with his family while he seeks review of his deportation order.