share
The immigrant community in Orange County, CA is convening the Liberen Al Pueblo Conferencia: Ni Una Mas Deportación! Free The People Conference: Not One More Deportation! on July 19th and 20th to organize ourselves to fight deportations and to protect our community from Immigration and Customs Enforcement. The conference will be focused on organizing towards the following demands, agreed upon by the immigrant community at the forefront of this fight who are directly impacted by immigration enforcement practices:

#1) The President must stop deportations and provide relief: President Obama must use his administrative powers to help as many people as possible, including the recommendations from the Blue Ribbon Commission.

#2) The Los Angeles Immigration and Customs Enforcement Field Office must release Santa Ana resident Samuel Sixtos A#095-735-387 from the Adelanto Detention Center.  Samuel was turned over to ICE by the OC Sheriff’s Department in violation of CA Law the TRUST Act. He is the father of a US citizen daughter, he has no significant criminal record, and he is a loved community member.

#3) The Orange County Sheriff’s Department must permanently end collaboration with Immigration and Customs Enforcement, including terminate the 287(g) agreement with ICE, the implementation of the Criminal Alien Program (CAP); all Inter-Departmental Service Agreements (also known as “ICE Contracts”); and any contact, communication, and or collaboration with ICE, as listed on the letter sent to the department on June 25th, 2014.

This first conference in Orange County on deportation defense is being organized by the migrant-led group RAIZ (Resistencia, Autonomia, Igualdad y Liderazgo), the local chapter of the California-statewide organization, the Immigrant Youth Coalition (IYC).

I am writing to urge the Orange County Sheriff Department to permanently end all communication and collaboration with Immigration and Customs Enforcement.

Although, the Orange County Sheriff’s Department claims to no longer honor immigration detainers, as they have been found unconstitutional by court law, the OC Sheriff’s department continues to notify ICE agents of suspected undocumented detainees prior to their release. In essence, the collaboration between the OC Sheriff’s Department and ICE has not changed. The undocumented community is still targeted for deportation proceedings, and our families are still being separated.

We therefore demand that going forward the Orange County Sheriff Department immediately stop all collaboration with ICE. This includes, but not limited to, immediately ending the following collaborations within all facilities: the 287(g) agreements with ICE, the Criminal Alien Program, and all Inter-Governmental Service Agreements (IGSA) also known as “ICE contracts,” and and any contact, communication, and or collaboration with ICE when releasing detainees from jail. 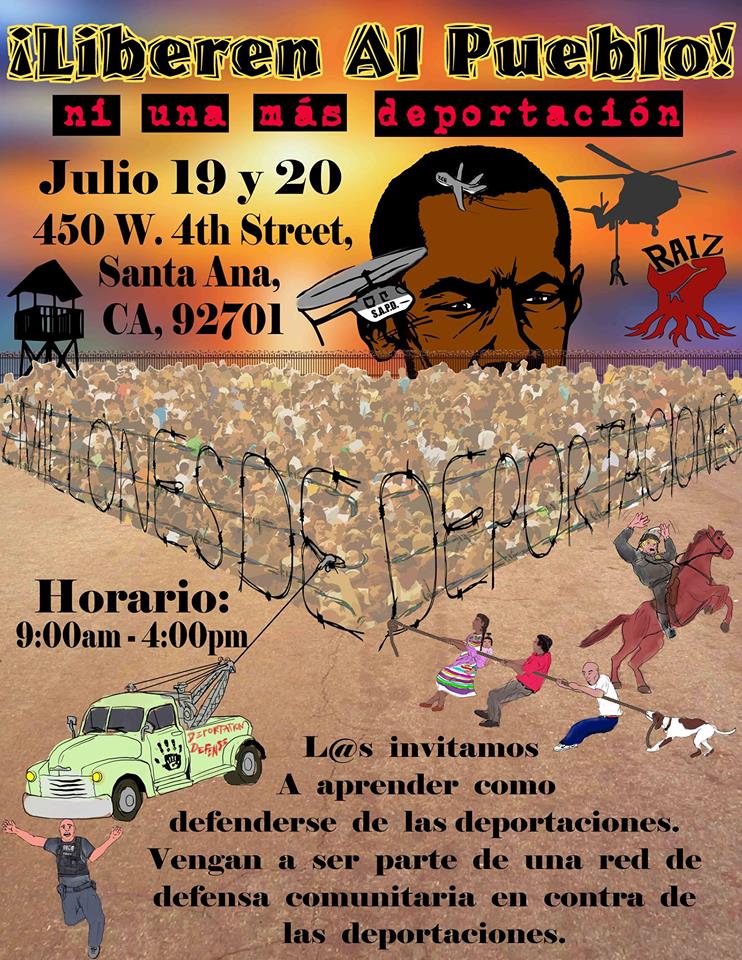 ORGANIZE WITH THOSE WHO HAVE FOUGHT AND WON
People attending the conference who fought and were successful in stopping their detention and deportation.

Victoria Delgado Arteaga: “it is important for me to attend this conference because I am still concerned ICE or Border Patrol can come get me and my family. Where I live in San Juan we are just waiting for the next raid. We must organize ourselves!”

Gurmukh Singh: “I just want to be with my family. Even though I am not detained, I still feel like I am. I will do anything for my family.”

Marcela Rodriguez: “Obama needs to stop all the deportations. He can do it. There are millions of people like me who have been turned over to ICE and our families have been broken apart. This needs to stop!”

Jose Francisco Garcia: “While being detained at the Adelanto Detention Center I almost died. My health has worsened and I want justice. No one should experience inhumane treatment. Unjust deportations need to stop!