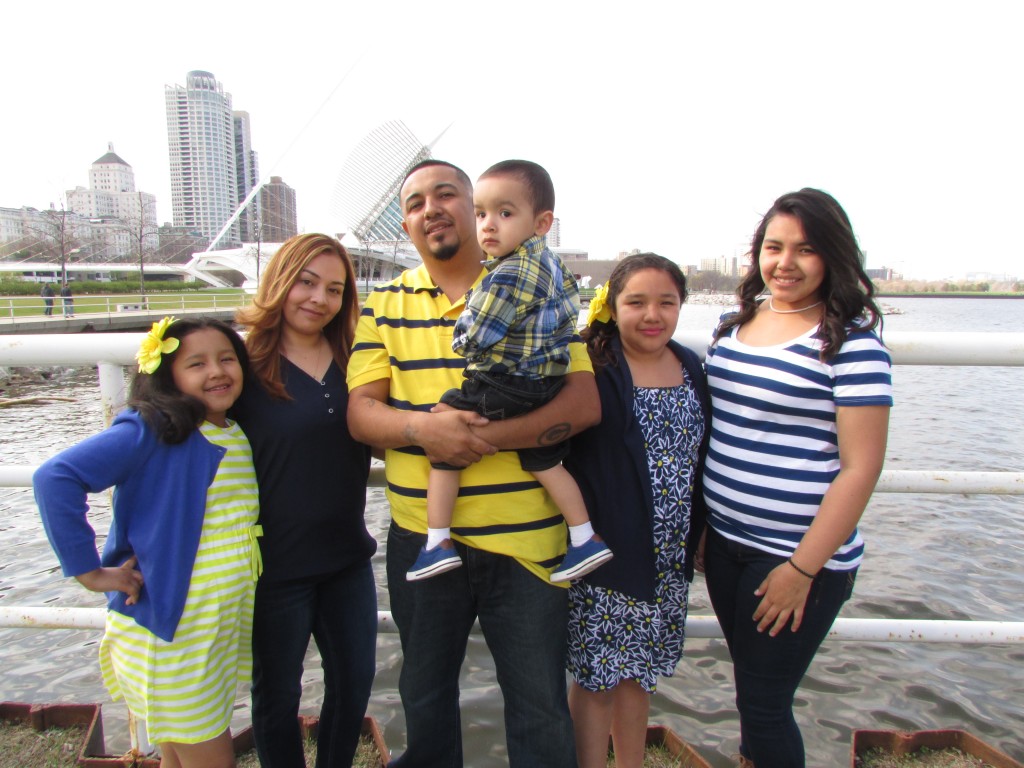 On May 27 Manuel Lopez was taking his children to school, when Immigration and Customs Enforcement Agents rushed his car and detained him. Stephanie, Manuel’s partner of 20 years and their 5 children, including his 2-year old, watched as Manuel was taken away.

That day ICE agents raided homes and workplaces throughout Milwaukee’s south side, arresting at least 21 people locally and 297 in surrounding states, claiming that these arrests targeted dangerous criminals, and that the community was safer after their arrest.

But Manuel’s family and his 5 children do not feel safer without him. Manny is 33 years old and has lived in the U.S. since he was 8. He is a caring father, a valued employee and an important member of his church, the Missionary Apostolic Church in Milwaukee. Since his detention, he has received a lot of support from his family and community, including from his children’s school, where the principal has encouraged parents to make calls to ICE in support of Manuel.

However, due to a 14 year old conviction, Manuel is being kept in detention, could lose his residency status, and could be deported away from his family.

Like many immigrants, when he was young Manuel’s family lived in an impoverished neighborhood plagued by gang violence, poor schools, unemployment, and a lack of resources for new immigrants. By the time he was in high school, Manuel’s classmates and neighborhood friends included those who had been recruited into gangs. But Manuel worked hard, graduated, and went to work in a meat packing factory with his father. In 200o Manuel plead guilty of a drug-related charge not knowing how it would affect his own immigration status. He was sentenced to eight months in prison and twenty years’  probation, which he has not violated.

Manuel’s detention does not make the community safer. Please help his family fight to stop his deportation.

UPDATE: Manny was released on bond from detention in early December 2014. He is still facing deportation, but will be able to spend the holidays at home with his family.

Two days after the raid his children spoke at a rally in front of ICE demanding his release. On June 19, Manuel’s brother Ruben, his niece Amari, and his daughter Briana participated in civil disobedience at the ICE office in Milwaukee.

Manny’s family is organizing to stay together. Join them by taking a moment to send an e-mail to the Chicago ICE office asking them to release Manny from detention and reunite him with his family.

I am writing in support of Manuel Lopez Hernandez Jr., A#070-542-039, who is currently being detained in the Dodge County Detention Facility. He has lived in the United States since 1989, and he is the caring father of five U.S. citizen children. Mr. Lopez’s children are being traumatized by his continued detention. They have nightmares and often struggle to sleep through the night. Mr. Lopez is a strong member of the Missionary Apostolic Church in Milwaukee, and he and his family have been important Wisconsin leaders in the movement for comprehensive immigration reform.

I am aware that Mr. Lopez has past criminal convictions: He pled guilty to delivering cocaine in 2000 and was sentenced to eight months in prison. He also was pled guilty in 1997 to a misdemeanor charge involving carrying a concealed weapon. However, neither the judge, the prosecutor, nor his counsel made him aware of the immigration consequences of those decisions at the time, and he is now seeking to have the pleas vacated. For the past 14 years Mr. Lopez has been a model family man and maintenance worker in Milwaukee. His deportation would cause tremendous hardship for his wife and children.

Mr. Lopez poses no danger to the community and is a caring father, valued employee, and an important member of his church, the Missionary Apostolic Church in Milwaukee. The principal of Mr. Lopez’s children’s school has encouraged parents to call ICE advocating for Mr. Lopez’s release, and Mr. Lopez’s employers at Harbor Pointe Apartments are supporting him. Mr. Lopez could be eligible for a number of avenues of relief, including a Stay of Removal and Prosecutorial Discretion. His lawyer is currently seeking to have his criminal convictions vacated, and I urge you to use your discretion to release him.