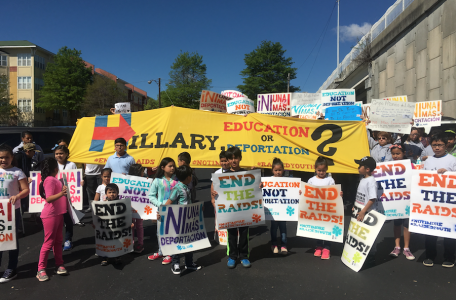 Students, teachers, and community members rallied outside the Democratic Party Offices in Atlanta, GA & Raleigh, NC on Thursday calling on candidate Clinton to “do everything in her power” to put her words into action and stop the removal and see to the release of 10 young teens raided by ICE in their homes and in some cases on their way to school.

Holly Hardin of the Durham Association of Educators explained, “My job is to teach kids. If our kids are in jail or a war zone we can’t teach them. We can’t do our job. Many of these youth have already been detained ALL of third quarter. Worse, ICE’s detention of these youth has caused a far-reaching trauma that dissaudes students from attending school and distracts them with the worry of removal. This has to end.”

The raids have had a chilling effect on local communities, with many hesitant to go to school as a result.  While the raids in general have become a focus for candidates when questions on immigration arise, concerned communities say that the specific cases of those caught in the raids whose fate currently hang in the balance are a test of the candidates’ commitments and are asking Clinton to address these 10 students directly and act on their behalf.

“We know that we are safer, we are stronger, and we are more whole when we know each other, when we stand up for each other, and when we take collective responsibility when our neighbors and our strangers ask us for help,” added China Medel of NC Southerners on New Ground Latinx Caucus. “Demanding the release of Wildin Acosta to his home, his school and his community is part of our effort to take responsibility for each other. We offer our love and courage to Wildin. We offer Durham as his sanctuary.”

In the past three months, the regional ICE office located in Georgia has proven to be the most aggressive in the country, responsible for one third of the total 336 people caught in nation-wide raids.

Caught in the raids are young people like Wildin Guillen Acosta, a high school senior from Riverside High School in Durham, North Carolina who was detained by immigration agents as he was leaving his parent’s home for school in January. Despite a pending appeal, ICE refuses to release him from Stewart Detention Center where he faces regular harassment from guards. Similarly, Jose Ismael Alfaro Lainez, an 18 year old Salvadoran teenager came to Georgia to be with his parents whom he hadn’t seen since age 5 only to be taken by ICE agents who hid behind a stairwell and grabbed him on his way to school.

A mother of Kimberly, one of the raided students, Lourdes Piñeda, spoke out at the Atlanta rally, “Our children should be in school and not in detention centers. We are here to demand that Hillary act on her campaign promises. The time to act on behalf of our youth is now.” “We are here to call on Candidate Clinton to do everything in her power and commit her words through actions and seek the release of our youth and community members. Detention centers are not for students, youth nor for our communities. The Atlanta ICE Field Office is responsible for 1/3 of the 336 people who have been victims of these raids, making it the most aggressive in the country. So, we are here to ask Candidate Hillary to show us through actions if she is for Education or Deportation,” concluded Adelina Nicholls, Executive Director at Georgia Latino Alliance for Human Rights.

The entire list of young people in detention caught during raids whose cases their teachers and community members have been able to document are:

An online petition on behalf of the students is available at: http://www.notonemoredeportation.com/portfolio/iceraidsyouth/