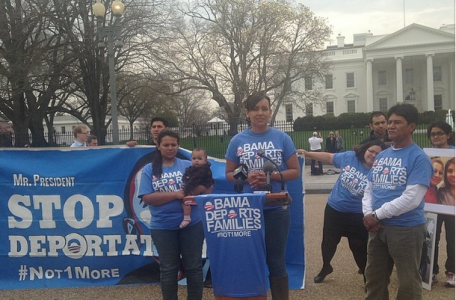 WASHINGTON, DC – Beginning on the April 5th “Two Million Too Many” national day of events against deportations, families and undocumented immigrants will begin an indefinite presence at the White House until President Obama stops deportations and reunites them with their loved ones currently held in detention.  Cynthia Diaz, an 18 year old U.S. Citizen, is fighting to keep her mother from being deported and asking for the Department of Homeland Security to release her from detention in Arizona. Naira Zapata, partner of Ardany Rosales, and Jose Valdez, father of Jaime Valdez, are fighting to bring home their loved ones, both of whom were deported in retaliation for civil rights organizing and recently presented themselves at the border to appeal their cases.

They say their families can’t wait for relief and that the President doesn’t have to wait for Congress to use his executive authority to stop the suffering. He could expand the deferred action program he created for immigrant youth and suspend deportations immediately. The families will remain on President Obama’s front lawn until their loved ones are released and until their demands for relief are met. END_OF_DOCUMENT_TOKEN_TO_BE_REPLACED