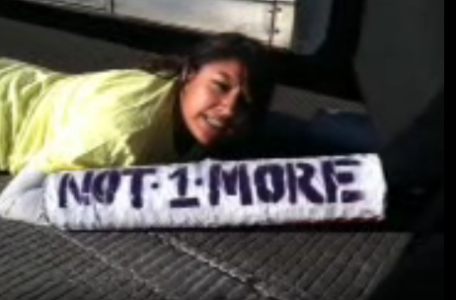 This morning, 12 immigrant rights activists locked themselves to the wheels of two deportation buses headed to Operation Streamline at a federal court where 6 additional people had chained themselves to the entrance to protest the proceeding they say is criminalizing immigrants and destroying core principles of the justice system.

According to multiple sources, as a result of the three and a half hour long and continuing peaceful blockade, the court, for one of the only times in it’s history,  cancelled the proceedings where detainees are presented in shackles in front of a judge and sentenced as a group.

The protest is part of the #Not1More Deportation campaign calling on the President to use his authority to keep families together and provide immediate relief from deportations for those who could benefit from a permanent solution. END_OF_DOCUMENT_TOKEN_TO_BE_REPLACED