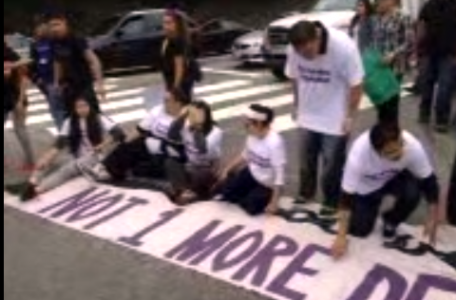 (06.07.2013) Los Angeles, CA  – Seated around a banner that says “Undocumented, Unafraid: Not1More Deportation” 11 undocumented people and allies blocked a busy intersection in Santa Monica during a larger rally nearby the President’s Los Angeles fundraiser. The rally referred to Los Angeles as the “deportation capital of the United States” citing that Los Angeles County deports more people under programs like “Secure Communities” than any other in the country, even more than Sheriff Arpaio in Arizona.

Similar to protests that greeted the President when he visited his hometown of Chicago, participants are risking arrest to urge the President to stop the 1,100 daily deportations that he continues to oversee as Congress debates reform.

“Why should my family still have to live in fear of being deported at the same time that Congress is talking about passing immigration reform? ” asked Myisha Arellano, an undocumented member of the Immigrant Youth Coalition originally from Mexico. “The President can’t just give speeches about reform when he’s also deporting our families in record numbers. He could stop our suffering and stop deportations with the stroke of a pen.”

Another protestor, Adrian James, an undocumented Malaysian-Indian immigrant from Thailand said, “Under the President’s current policies, people are being racially profiled and targeted. Victims of crimes can’t even seek help. We’re doing this to make that change.”

Luis Serrano, an undocumented member of the Immigrant Youth Coalition, added “It doesn’t make sense to keep deporting people that could qualify for immigration reform. We want our families to still be here when a path to citizenship opens. We’re calling on the President to give our parents and everyone in our community the same relief he gave when he created DACA.”

Also in attendance at the rally were families currently in deportation proceedings whose specific cases protestors were calling to be closed.

Read the bios of the participants here