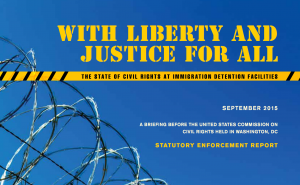 The 499-page report meticulously detailed evidence it relied upon in making these recommendations, which largely derived from university studies, reports from journalists and researchers at think tanks, congressional records, the Department of Homeland Security and advocates.

The report attributes much of the harm to private contractors, like GEO and CCA, who run these detention centers for the DHS. DHS is one of the largest jailers in the United States, detaining about 30,000 on any given day. The report raises alarming questions about DHS’ failure to get their own contractors to obey their own policies – jeopardizing the health and safety of everyone detained in DHS’ contractor jails and prisons.

By far, the most disturbing practices involved DHS’ oversight of medical care in jails.

The report lists several cases where ICE refused to provide, mistakenly provided or delayed in providing life-saving medical care. For example, several jail officials ignored classic symptoms of cancer, eventually resulting in death. In 2012, a 46-year old man died of a heart attack because he was previously denied access to medication that could have saved his life. Another involved a young man with mental illness who was so overmedicated that he slept for 36 hours, and fell off his bunk rupturing his testicle and broke his eye socket.

The tragic death of Victoria Arrellano, a transgendered woman, in 2007 highlighted the particular risks transgendered and LGBT immigrants are exposed to in jail. Ms. Arrellano suffered through days and weeks of misdiagnosis of her AIDS-related infections by jail staff and hospitals, as the jail transferred her back and forth from the detention cell to the hospital. After days of vomiting, diarrhea and fever, Victoria was brought to another hospital where she died – shackled to her bed.

Christina Lopez’s current case in Santa Ana demonstrates that the concerns in the report are on-going. Lopez, a transgender detainee, suffers from hepatitis C and regularly has faced institutional neglect in receiving treatment. Advocates report that her continued detention jeopardizes her health.

For groups working to end or reform immigration detention, particular sections of the report stand out as quotable.

On the issue about whether private detention centers contracted by DHS abide by the standards, the Commission found,

“The Commission finds that certain privately owned detention centers are not complying with DHS detention standards. However, a deeper examination must be done to determine the extent to which the federally contracted facilities deviate from federally mandated standards for medical care of detainees.” (page 36)

On the issue about whether DHS facilities adhere to standards that protect detained LGBT immigrants, the Commission stated:

“The Commission finds that certain ICE facilities may not be fully adhering to PBDS 2011 standards that are specific to the LGBT detainee community.” (page 39)

On reports on whether DHS complies with the Prison Rape Elimination Act (PREA), an act designed to prevent the rape and sexual abuse of prisoners, the Commission had strong opnions on the subject. Here are few of their findings.

“The Commission finds that DHS lacks transparency regarding their contracts with private detention companies. This inhibits the assessment of proper implementation of PREA standards.” (page 79)

“The Commission finds that ICE CDFs lack accountability in complying with PREA inspection policies because such reports are not made publicly available.” (page 80)

The Commission also found or were concerned that the constitutional rights of detained immigrants were being violated:

In response to DHS’ arguments that they hold immigrants in detention centers that are not like criminal jails, the Commission disagreed. They found that the person’s constitutional rights were violated because their conditions of confinement were more punitive than administrative.

The Commission believed that many detained immigrants were being held under bail amounts that would be considered excessive i.e. too high.

The Commission also reported instances that DHS officials interfered with access to counsel, writing that “[evidence] indicates that federal employees are interfering with an attorney’s ability to represent clients.” (page 114)

“The federal government’s policies affecting a detained immigrant’s ability to obtain counsel may rise to a level where a court would find such practices to be inconsistent with the Fifth Amendment’s Due Process Clause.” (page 123)

The Commission found there was evidence that the government may be violating a detained immigrants’ rights to free exercise of religion. (page 123)

The Commission made several findings about the treatment of unaccompanied minors, finding evidence that DHS had violated several agreements relating to children’s detentions. Here are a few quotes:

“The Commission is concerned that federal agencies responsible for detaining children are not fully complying with FSA standards after analyzing the federal government’s actions in relation to the testimony, affidavits, Commission fact-finding visits, and reports that the Commission received. Although the affidavits contained above are only a sample of the entire detained migrant children population, they only compound the well documented evidence of abuse that occurs at certain federal immigration detention facilities.” (page 61)

“[T]he Commission is concerned that ORR is not complying with its staff educational requirements or providing detained children with adequate education.” (page 65)

Democrats Still Have an Immigration Test to Pass
BREAKING: At least 27 women on hunger strike at the Hutto Detention Center #Hutto27
Comments
Search the Blog
Video: Accompany the Struggle to Say No More Deportations
Click to Stop their Deportations