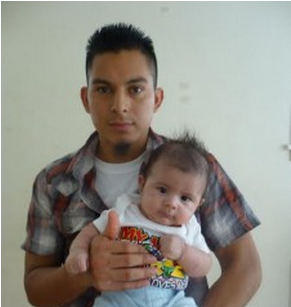 On Friday December 13th, Immigration agents raided an apartment building in the north side of Chicago, knocked on all the doors looking for a suspect, and checked the immigration status those they found in their way. Anibal Eligio Fuentes-Aguilar, a worker and father from Guatemala, and building resident was placed in immigration detention that night.

After Anibal’s family and community mobilized, he was released from  detention two weeks later, given an ankle bracelet, placed under continuous monitoring.  On Friday January 31st, his request for prosecutorial discretion was denied, and he was given until the end of February to leave the country. He is now asking the Washington D.C. offices to review the case, and re-consider stopping his deportation

Anibal came to the US after his parents passed away in Guatemala. On his journey to Chicago, he was detained at the border and sent back to Guatemala. Less than a year after being stopped at the border, he decided to return to Chicago to live with his wife. Anibal has lived in Chicago since 2010, and has become very active in his community and his local soccer league. He has a 6-month old baby, Franky, who is a US citizen. Anibal  has no criminal record, and was only placed into immigration custody due to his first encounter with border patrol over 5 years ago. In addition, Anibal fears returning to Guatemala, a country where before his father passed away, he had been kidnapped three times.

The apartment building where Anibal and his family live has been raided by ICE at least 4 times. ICE officers are showing up to residential areas wearing vests that say ‘police’, requesting entrance into people’s homes, and taking undocumented immigrants into custody.

I am writing to ask that you stop the deportation of a Chicago father, Mr. Anibal Eligio Fuentes-Aguilar (A# 087489011), who has no criminal record and has been an asset to the community. Mr. Fuentes-Aguilar is the father of a 7 month old US citizen child who is under daily medication. He is the sole economic provider for his family, and his child and his wife are suffering greatly without his contributions and his emotional support. In addition, Mr. Fuentes-Aguilar fears returning to Guatemala, his father had been kidnapped three times before passing away. He has no family in Guatemala and his son and wife need him.

I am aware that Mr. Fuentes-Aguilar only has prior stop at the border in 2009, however the positive factors in Mr. Fuentes-Aguilar’s — that he has a US citizen son who relies on him economically for survival, his lack of ties to his home country and that he is not a public safety nor national security threat — outweigh the negative. In addition, Mr. Fuentes-Aguilar has since been an active role model in his community through his local soccer league and his widespread support from his friends and neighbors.

Mr. Fuentes-Aguilar was placed in ICE custody on December 6th, 2013 after immigration agents entered his apartment building looking for another person. ICE agents found Mr. Fuentes-Aguilar and placed him in immigration detention. He was held at McHenry County Adult Correctional Facility and released on December 19, 2013 under the Intensive Supervision Appearance Program (ISAP).

Anibal is the sole supporter of his family and his son, Franky, needs him. I urge you to consider granting his request of prosecutorial discretion.

UPDATE: On Tuesday March 5th, Anibal was granted a 6-month stay of removal, until September 2014. While he is relieved, he will continue to work on getting ICE to close his case. Thank you for all of your support. Unless something changes before September, there will be another campaign to stop Anibal’s deportation then.

Maru is fighting hard to bring her “big bear” home: Will you join her?
At 6 and 3 Years Old, These Two US Citizens Could Lose Their Father
Comments