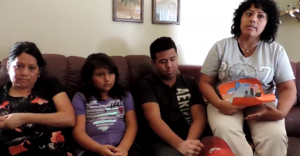 Update: Ezequiel was released on bond, thanks to all of your support!  Please stay tuned for updates about his case.

Not long after Ezequiel Torres-Salazar (A#201161984) came to the U.S. as a toddler, deportation touched his family. He lost his dad to ICE’s family separation machine when he was 10, and as the oldest child, became his mom’s biggest source of support. He had dreams of finishing high school and applying for DACA, until he was detained and deported himself.

Ezequiel was arrested for minor drug possession, a charge that for most people would mean a slap on the wrist; for Ezequiel, it meant deportation. Committed to holding down his family, Ezequiel quickly returned, and re-enrolled in high school, returning to dreams deferred.

However, one year later, Ezequiel was detained for re-entry, and has now been held in Eloy Detention Center for 8 months. Ezequiel deserves to be at home, helping his mom to care for his niece and younger brother, finising high school, and preparing to be married to his U.S. citizen fiancee, Jessica.

DACA recipient on ICE hold after “not guilty” verdict
He did not come home from the store, pregnant partner left waiting
Comments