DREAMer, Father of 5-Year Old Girl to be Deported for Working: Free Benjamin! 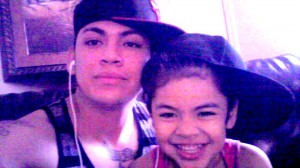 Benjamin Dominguez Rojas (A#205-855-599) was released on bond and is now back with his five year old daughter as a result of signatures and public pressure! People power wins! Please go to notonemoredeportation.com to support others still in detention.

Benjamin Dominguez Rojas (A#205-855-559), a young father, was working to support his daughter and saving up for his Deferred Action application. Now, he in detention and could be deported this week, arrested for having the fake ID he needed to work. Benjamin graduated from high school in Arizona. He fell in love, married Daniela, and together, they are raising a playful 5-year old daughter, Leslie, a U.S. citizen. Benjamin has no prior deportations and no criminal charges other than those stemming from working. ICE is setting DREAMers up to fail. Deferred Action applications cost a hefty fee, yet DREAMers are criminally charged and scheduled for deportation for working to raise money for the application. This catch 22 is just one part of the detention-deportation machine separating families every day. Leslie says, “Please help bring my Daddy home!” Tell ICE to stop deporting loving moms and dads for working!

To: John Gurule, Phoenix Field Office Director; Phoenix Office of Public Affairs I am writing to ask you to immediately release Benjamin Dominguez Rojas (A#205-855-559) and cancel his deportation. Benjamin was driving home from work in Queen Creek when he was pulled over in a routine traffic stop in September. When the officer asked for his ID, he gave him the fake identification he uses to work. A fake identification is the only way that Benjamin can work to support his family. Benjamin and his wife, Daniela, have a 5-year old daughter, Leslie, who is a U.S. citizen born here. Benjamin graduated from high school in the U.S. and would be DACA-eligible except for the charge related to an ID to work. He has no other criminal charges and no prior deportations. Despite the obstacles he faces to work, Benjamin does what he has to do to make sure his little girl is taken care of. He should not be separated from Leslie because he was working to support her. Please cancel Benjamin’s deportation and release him immediately. I await your response.

Rhode Island Immigrant Could be Deported, Act Now to Urge the Governor of Rhode Island to Stop Honoring ICE Holds
Maru is fighting hard to bring her “big bear” home: Will you join her?
Comments