ICE Deporting This Man Proves It’s Not Following its Priorities 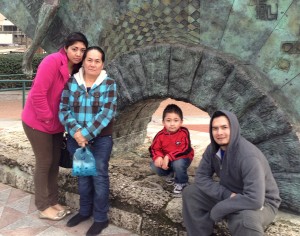 Irvin Francisco Pineda Mauricio is a Guatemalan man who arrived to the U.S in 2005, he is a husband, a hard worker, and a father.

Three years ago he was pulled over by Hall County police in Georgia for driving 5 miles over the speed limit. When his family arrived to pay the bond, ICE agents were already at the county jail and he was transferred to immigration detention to be processed for deportation.

Irvin graduated as a teacher in his country of birth, a degree which he could not excercise when he moved to the U.S to find better ways to support his family. In 2010, Irvin met his wife Brenda, mother of a little boy who Irvin took as if he was his own child. As a devoted stepfather and husband Irvin worked two jobs making sure he would have time to take his step son to school and welcome him when he came home.

This is why for the last three years Irvin has been fighting his deportation, but in March the immigration court gave him a deportation order. When he did not show up to ICE, immigration agents came to his community and detained him blocks away from his home.

Even under ICE’s own standards, a traffic misdemeanor should not be considered reason to deport Irvin and tear him away from his family. Please support Irvin’s release by telling the ICE office to excercise discretion and stop his deportation.

Please sign below to tell the Georgia ICE Field Office that Irvin should not be deported.
Click here to read your message to the ICE office

I am writing to you with great concern for the detention and deportation of Mr. Irvin Francisco Pineda Mauricio (A​ 205-132-566). He has lived in the U.S. for close to ten years, is the caretaker of his wife and step son and is a hard worker. With one simple traffic violation for driving without a license, Mr. Pineda Mauricio should not be considered priority for removal even within ICE’s own standards. I urge you to consider his release and stop his deportation.

Mr. Pineda Mauricio is a Guatemalan man who arrived to the U.S in 2005.  In 2010, Pineda met his wife Brenda Alejo mother of a little boy whoMr. Pineda Mauricio took as if he was his own child and to whom, ever since. As a devoted stepfather and husbandMr. Pineda Mauricio worked two jobs making sure he would have a free space before and in between jobs in order to take and then receive his stepson at home every day after school.

On 2012, he was pulled over by a Hall county police officer for driving 5 miles over the speed limit. When family members arrived to pay the required bond, ICE agents were already at the County Jail and he was transferred to an ICE facility on a single No-Driver’s license charge. In March 2015 he was ordered deported and taken into ICE custody.

Stop Deportation of Blanca Borrego, Texas Woman Turned in by Gynecologist
ICE is Deporting People for Driving Without a License, Don’t Let Julio Be One of Them
Comments