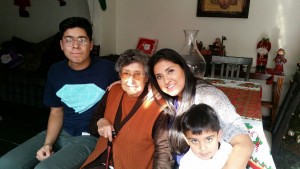 This Thursday February 11th Lesly Sophia Cortez-Martinez will be arriving to O’Hare airport in Chicago, with her two children, after U.S. Border Patrol decided to rescind their deportation order. But as soon as she lands she will be turned over to Immigration and Customs Enforcement (ICE) who will then be able to decide whether they put her in deportation proceedings, detain her, or allow her to be with her family.

Her legal council has already submitted a request for ICE to use prosecutorial discretion to release her, and has asked for ICE to give her an answer before she gets to Chicago, by Thursday morning.

Over Christmas, Lesly Sophia Cortez-Martinez, a mother of three citizen children and a DACA recipient who has lived in the US since she was 15 received permission from US Citizenship and Immigration Services USCIS) to travel to Mexico in a routine process called “advance parole.”

However, ​when returning home, ​Customs and Border Patrol ​ (CBP)​ disregarded the authorization granted by the other agency, ​questioning her eligibility for DACA and ​citing past issues with border patrol.

But after a few days, the outpouring of community pressure and a strong legal respose moved Border Patrol to reconsider its decision. Border Patrol is rescinded its deportation order and will allow her to return to the United States to reunite with her family.

However, Lesly’s case is not over.  Border Patrol has indicated that it will initiate deportation proceedings against her, turn her over to Immigration and Customs Enforcement upon arrival, and even has pledged to seek nullification of her DACA status.

Lesly’s DACA status is intended to shield her from initiation of the deportation proceedings Border Patrol is still pursuing and her lawyer expects ICE to use its discretion and cancel any pursuit against the still nursing mother.

Please sign the petition to show your support, and urge ICE to put an end to Lesly’s deportation before she gets to Chicago on Thursday.

UPDATE: Although Lesly was placed in deportation proceedings as soon as she landed at O’Hare airport, she was released to her family. Lesly, her family, and her attorney are now working to get her deportation process stopped so that she can be with her family.
Click here to read message to Chicago ICE Office

I am writing to you as a concerned member of the public regarding the case of Ms. Lesly Sophia Cortes-Martinez (A# 204-421-151) whose case will be in your jurisdiction this Thursday February 11, 2016. Ms. Cortes-Martinez was deported from Chicago’s O’Hare airport by U.S. Border Patrol last month, even though she had been granted Deferred Action for Childhood Arrivals (DACA) and Advanced Parole before traveling to see her family in Mexico. Last week Border Patrol rescinded their deportation order, and will allow her to travel back to the U.S. on Thursday, at which point they will turn her over to ICE jurisdiction. I urge you to use prosecutorial discretion in Ms. Cortes-Martinez’s case to release her on her own recognizance and allow her to be with her family when she returns.

Ms. Cortes-Martinez’s legal representation has submitted a request for prosecutorial discretion from the Chicago ICE Field Office. I write in full support of her request so that Ms. Cortes-Martinez can be reunited with her children.