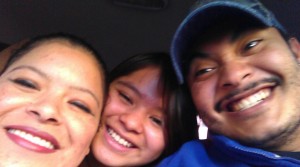 Update:Unfortunately Melvin and his family stopped working with the community organization looking into their case. We believe Melvin was deported.

Melvin Waldemar Meza Del Cid  (A#200-069-000) could be deported after being stopped by Phoenix PD for a minor traffic violation.  He was arrested more than three months ago, after receiving a threatening phone call from his boss when he protested late payment for work he had completed.

Beverly, age 12, dropped out of school after her father’s arrest, too heartbroken to complete the 6th grade in her father’s absence.  She and Melvin used to spend all of their time together, practicing English and playing games.  Her mother, Melissa, says that she has never been away from him before, and just cries and cries in her dad’s absence.

Melvin called Melissa last night, telling her to be strong and take care of his daughter, the most important thing in the world to him.  This loving father belongs with his family.

Tell ICE to stop the deportation of Beverly’s dad!  All families belong together!