In response to the comments made by Sec. Johnson as reported by the Hill in which he defended family detention and rejected the growing demand for a moratorium on deportations, Marisa Franco of the #Not1More Campaign issued the following statement:

“Jeh Johnson was appointed to be a reformer of what the Administration admitted are inhumane immigration policies. Instead, he has become a defender of the indefensible.

For the Administration to reject the growing consensus for a moratorium on removals after the Supreme Court decision on DAPA shows a lack of imagination and lack of compassion.  For the Secretary to admit that it is punishing undocumented immigrants who are already part of our communities in order to send a message of deterrence shows the real cruelty behind current policy.

The Secretary is missing in his assessment that immigrant communities already are in a humanitarian crisis. It is caused by the policies he is defending. The President has unused authority and unfinished work to dismantle the deportation machine he built and bring humanity to its immigration policy before passing it along to his successor.”

More than 50,000 individuals have signed petitions calling for a moratorium on deportations in the wake of the Supreme Court ruling.

In the wake of the reports that the Department of Homeland Security is gearing up for a 30 day offensive targeting refugee mothers and children, the teachers of 9 high schoolers who have been held in detention since early 2016 interrupted Sec. Johnson at a commencement speech in Nashville, TN.

“We want to see our students graduate but that’s impossible when ICE agents stalk them outside their houses and DHS refuses to release them from detention,” explains Holly Hardin, a teacher who traveled from Durham, North Carolina, to confront Johnson. “Johnson has no business addressing high schoolers about their future when he’s thrown the future of refugee teens into jeopardy.”

Teachers and Students Tell Johnson to Stop the Raids

In response to DHS Sec. Jeh Johnson’s statement on the coordinated raids of 121 people as young as four years old in the beginning of the new year, Chicago lawyer Mony Ruiz-Velasco edited the Secretary’s statement for accuracy. Her results are below. END_OF_DOCUMENT_TOKEN_TO_BE_REPLACED 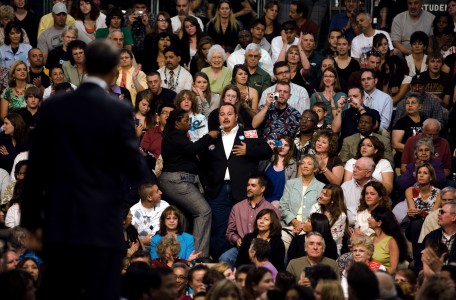 For quite some time, we have joined others in calling upon the President to meet directly with immigrants most impacted by his misguided deportation policy. We feel it’s important for the President to engage directly with immigrants who are struggling to achieve equality, and not just partisan lobbyists. We’ve compiled a list of questions we want answered, but we know there are many more. Will you add your questions using the hashtag: #Not1more day w/out equality? Read more
14

Is the President’s nominee to lead the Department of Homeland Security anti-immigrant? The truth is that nobody knows.  Nobody has bothered to ask.