Imagine the person you love most being taken from you. Your spouse, your parent, your sibling, shipped off with little warning. Or imagine having grown up in the United States and being deported to a country in which you have no friends or family, no prospects for work. You don’t even speak the language.

For scores of people, these scenarios are not imaginary. Every day, about 1,000 people are deported from the United States. Devastated spouses and children, families torn apart by U.S. immigration policy, are left to pick up the pieces. This week, dozens of people affected by the U.S. deportation policy are marching the Trail to End Deportations. Their trek began at the Phoenix office of the U.S. Immigration and Customs Enforcement (ICE) office and ends at the Eloy Detention Center, drawing attention to the immoral practice of mass deportation.

“We walk to Eloy as part of the National Day of Action against Deportations because we need to make our suffering known, and also our power,” the marchers wrote in a recent statement. “Eloy is known as one of the worst detention centers in the country: two people committed suicide there in the last year and solitary confinement is a regular punishment for trying to exercise your rights inside.” END_OF_DOCUMENT_TOKEN_TO_BE_REPLACED 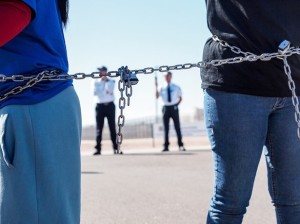 Eloy has enough beds for 1,600 people and has already had two men commit suicide inside this year. The prison was responsible for the placing of six of the Dream 9 — student activist who attempted reentry into the United States as protest July — in solitary confinement. The prison is run by Corrections Corporation of America, whose reported revenue has doubled throughout the 2000s as the federal government has contracted it to hold an increasing number of undocumented immigrants. END_OF_DOCUMENT_TOKEN_TO_BE_REPLACED

On Friday, protestors locked themselves to the wheels of buses carrying detainees destined for Operation Streamline, a federal court they cite as the worst example of the criminalization of immigrants. As a result of the protest, it's reported that those on the bus were immediately repatriated instead of facing felony convictions and months in private prisons before being deported. After two days of conferencing over the weekend, the Day of Action to Shut Down ICE began with six people, including Sandy Estrada who's brother has been in detention for nearly a year, chaining themselves together on the entry road to the notorious privately-run Eloy Detention Center. After bringing attention to the facility and disrupting its activities, protestors unchained and joined several hundred in Phoenix for a march and protest determined to prevent any deportations from being processed through the building today. Read more
25

By the Time You Wake Up Tomorrow – A Call to Action 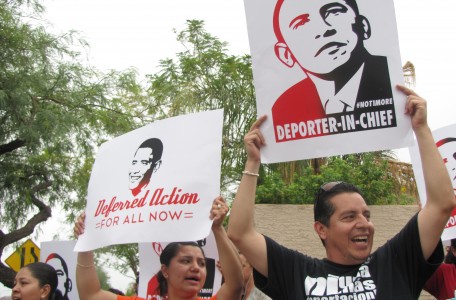 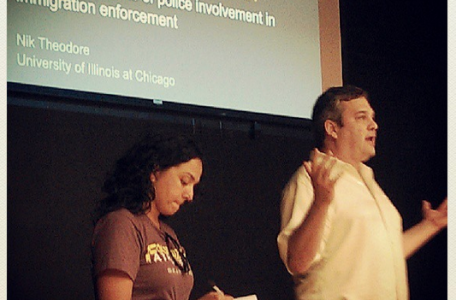 The same day that the Senate voted to pass immigration reform, hundreds in Phoenix, AZ attended a community forum to discuss and address the crisis of confidence in local police caused by their involvement in immigration enforcement.

Community members targeted by racial profiling and raids spoke out and heard from Dr. Nik Theodore of University Illinois Chicago who wrote the study: Insecure Communities: Latino Perceptions of Police Involvement in Immigration Enforcement  based on data from Phoenix and three other cities that shows nearly 1/2 of Latinos are less likely to call the police, even when victim of a crime, because of their fear of immigration consequences.