END_OF_DOCUMENT_TOKEN_TO_BE_REPLACED

Protestors sitting atop ladders and locked together are currently blocking inbound traffic outside of the Regional Immigration and Customs Enforcement (ICE) Field Office located at 101 W. Congress in Chicago, IL as others read a declaration inside the building.

“I am here to say that there needs to be an end to raids and deportations,” explains Francisco Canuto, whose home was raided by ICE in November of last year, while agents were looking for someone else. “Agents entered my home under false pretenses, they fingerprinted me and my roommates, and took me into detention. I spent 13 awful days in a detention center that I don’t wish on anyone.”

Citing ongoing ICE activity in the region, the group led by Organized Communities Against Deportations (OCAD) is calling for an end to all raids, not just those that targeted Central American families earlier this year. They point to the agency as part of the largest police force in the country and are joined by leaders from the movement for Black lives who say there is a connection between their efforts.

“Undocumented people in Chicago and nationally are living in fear daily of being taken from their homes and away from their families. We, as Black American community organizers, can relate to that fear,” members of Assata’s Daughters explained in a statement. “Our communities experience that fear when Chicago Police Officers patrol our neighborhoods, stop and frisk us, occupy our schools, and arrest us in mass. Our struggles are distinct but connected. When enforcement is overfunded, that is money that is not being spent on services that actually keep us safe…” (Read the full statement from Assata’s Daughters here)

The civil disobedience puts a spotlight on a history of abuse stemming from the Chicago Field Office run by Director Ricard Wong outlined by a list of grievances that those targeted by immigration enforcement are reading out at the protest including:

“Chicago spends 40% of its budget on police,” adds Tania Unzueta, Policy Director for the #Not1More Campaign and organizer with OCAD. “At the federal level, government spends more on immigration than all other law enforcement combined. We have to invest in developing and nurturing our communities not deporting and incarcerating them. If these agencies have endless resources, they will find endless ways to target and harm our families. They need to be defunded and dismantled.”

Read the history and detailed outline of grievances here 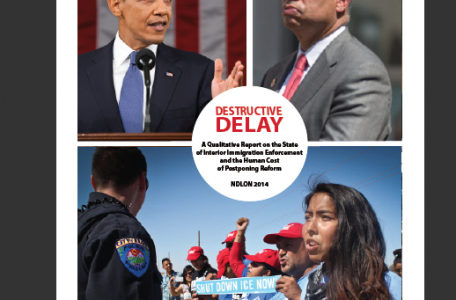