A Refocus of Strategy on Immigration Justice: Not One More Deportation

The following opinion piece was written by three Unitarian ministers in Arizona as a reflection on right relation and strategic direction for faith leaders’ participation in the immigrant rights movement after their participation in mass protests to “shut down ICE” in October of this year. It is not often in the news. Every day, more than 1,100 people are removed or deported from the U.S. The number adds up to roughly 400,000 per year – a quota set by President Obama’s administration. Families are being torn apart every single day.

From the days of the Hebrew prophets and long before, people of faith have acted up and spoken out to counter abuse and oppression. Our faith instructs us to treat every person with worth and dignity and to remember that what affects one affects us all. Compassion is calling for a refocusing of strategy.

Therefore, activists and faith leaders are increasing pressure on President Obama and Congress to address directly this crisis.  During the weekend of October 11-14, activists in Arizona caught the nation’s attention after blocking two buses full of shackled immigrants destined for federal court, prison and ultimately deportation. The escalation of tactics was aimed at stemming the onslaught of deportations and detentions that are a daily occurrence in the lives of families and communities with members who are undocumented. The strategy on the ground is to confront directly the deportation machine.

The US Senate’s action on Comprehensive Immigration Reform (CIR) gave many the hope that reform might happen, even as it created division. The parts of the bill calling for massive increases in border enforcement are untenable to those who already live with the current level of military-style border security.  The House obviously left 2013 with reform undone and its outcome next year remains unclear.  Meanwhile, every month that action is delayed, another 30,000 people are deported.

Despite what appears as movement in Washington, D.C., the lives of undocumented people and their families remain unchanged, or are even worse than in 2010 when Arizona’s anti-immigrant bill SB 1070 was introduced. Even while much of SB 1070 was held back by courts, the worst part of the bill—the racial profiling provision—stands and has become standard procedure for both Phoenix and Tucson police departments.

Even as Sheriff Arpaio was found guilty of racial profiling and constitutional violations and denied immigration enforcement authority, the City of Phoenix has stepped up its collaboration with the federal Immigration and Customs Enforcement Department (ICE).

Across the country, the collaboration of local law enforcement with federal immigration authorities (called Secure Communities) results in the continued detention and deportation of tens of thousands of people each month – the vast majority hard working people, many who have lived in the US for decades, working and trying to provide for their families here and back home.

The newspapers and televisions stations do not cover these stories. No reporters are present at the minor traffic stops that lead to ICE holds.  Since it is not in the news, it is easy to forget that this remains a daily reality for hundreds of thousands of people – and millions live in fear of it happening to them. 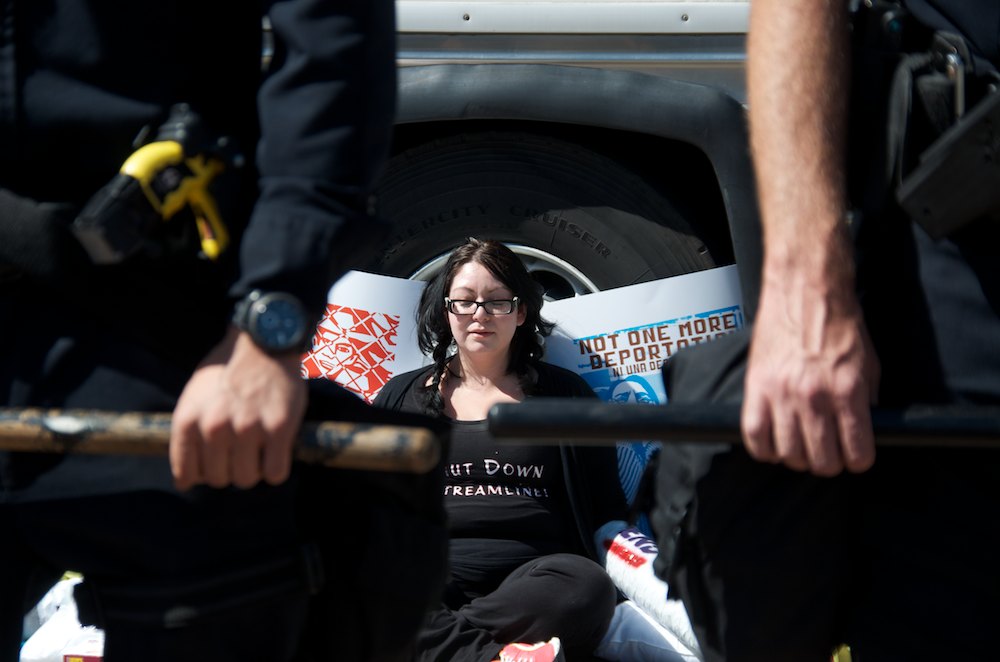 On Friday, October 11, activists, including Unitarian Universalist Emrys Staton, working with Puente, NDLON (National Day Laborer Organizing Network), and others shut down the Federal “Operation Streamline” court proceeding. This court tries and sentences 70 people each day for crossing the border outside a port of entry. The 70 people are shackled together and brought before a federal judge in groups of 10-12 people at a time. They have already been instructed to agree to a plea deal during a minutes-long meeting with court appointed attorneys beforehand. The trial, conviction and felony sentencing of all 70 rarely last more than an hour. Now with federal criminal records, the 70 are taken to a private detention center to serve their sentences, averaging 30-180 days each, before being officially deported.

The following Monday morning, a group of undocumented activists chained themselves to the entrance at the Eloy detention facility to prevent anyone from being brought into the jail for immigration detention.  And in the afternoon, hundreds marched in protest to “Shut Down ICE” outside of the downtown Phoenix ICE central office. The protest turned into a dance party as all activity at ICE had been closed for the weekend, likely in anticipation of the protests.

“We’ve got to stop the bleeding” Pablo Alvarado, the Executive Director of NDLON said.  The bleeding is the constant deportations, the ongoing separation of families.

We believe Alvarado is right.  Our immigration system is unjust and inhumane. It has created a system to exploit workers and supports profit making by their criminalization.  It needs a holistic, humane and comprehensive fix.  But in the meantime, hard working communities and families are suffering terribly as they lose family members, and breadwinners, parents and children to detention and deportation.  Action and commitment grounded in courage and compassion, is needed.

The goal of this expanding strategy is not to pit efforts in favor of legislative reform against efforts to stop mass detention deportations.  As Marisa Franco of NDLON says, “Successful social movements throughout history have always been defined by multiple forces, pushing on multiple fronts.”

At the same time, as a faith community, grounded in love and justice, we must keep our attention focused on trying to stop the most egregious violations of human dignity currently going on – the mass detention and deportation system. “Imagine what would happen if the deportations ended,” Pablo Alvardo said.  “Just imagine how the people, how the families and children would flourish and open up if the constant fear of separation and deportation ended.”  Imagine that beautiful day.  In the midst of this long struggle for dignity, it’s important to keep our hearts and our communities committed to the vision of that beautiful day.

The momentum is turning to include not just Congress, but specifically to President Obama.  We are calling on him to end the deportations.   We hope you will join in the effort to pressure President Obama to stop the deportations. Planning and supporting actions that call attention to the inhumanity of the system and people’s suffering, we can unite to end what is the most devastating aspect of this system.  We hope you will join these efforts and find ways to partner with NDLON and groups in your community offering a united voice crying out, “Not One More: End the Deportations.”