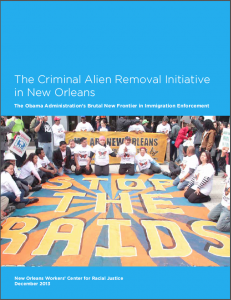 According to a press release by the New Orleans Center for Racial Justice, which published the report, “The little-known Immigration and Customs Enforcement (ICE) program, called the Criminal Alien Removal Initiative (CARI), involves indiscriminate community raids by ICE squads at apartment complexes, grocery stores, laundromats, Bible study groups, and other public places frequented by Latinos—based purely on racial profiling.” The report documents the stories of people who have been placed in immigration detention and deportation as a consequence of this program, and how the New Orleans community has responded.

Over the last year, the National Day Laborer Organizing Network has been working with the New Orleans Center for Racial Justice’s Congress of Day Laborers to fight against the deportation of several of their members, highlighting their stories, and supporting the local organizing. As the report documents, knowledge about the CARI program came about after the Congress of Day Laborers requested a headquarter review of one of these cases, Erlin San Martin Gomez. In the review of the case, Immigration and Customs Enforcement (ICE) included information about the CARI program, which organizers assume was a mistake.

The fight to end programs like CARI is part of the national call for the President to take action to stop deportations. As the Worker Center’s press release states, “With the Obama Administration continuing to deport immigrants at the blistering rate of 1,100 a day, the report calls on President Obama to use his executive authority to put an immediate halt to deportations.” Along with the communities in New Orleans, NDLON echoes the call for not one more deportation.

As part of the campaign to stop deportations, NDLON has supported the local community response to CARI and the deportations in New Orleans, helping organize a civil disobedience in front of the New Orleans ICE office in November, asking for a stop to these raids, and for the closing of the cases of people who have been placed in proceedings as a result of these operations. Many of these cases are still pending, including:

As a result of the organizing, the CARI raids have also caught the attention of local elected officials. On December 12, U.S. Rep. Cedric Richmond wrote to ICE Director John Sandweg expressing grave concerns about the recent ICE raids. Rep. Richmond’s letter stated: “Profiling any race is not the American way and no one should be subject to unethical pursuit; especially not while accompanying your son at his school bus stop, while attending weekly Bible study meetings, or while purchasing food for your family at the local supermarket.” See full letter below.

A Refocus of Strategy on Immigration Justice: Not One More Deportation
Breaking: Cali Youth Tell Sheriff Mims to Cut Off ICE
Comments
Search the Blog
Video: Accompany the Struggle to Say No More Deportations
Click to Stop their Deportations