END_OF_DOCUMENT_TOKEN_TO_BE_REPLACED

White House Asked: Is the President Aware of the Issue of Trans Detention?

Watch the video below.

Democracy Now: Jennicet Gutierrez on Why She Interrupted the White House Pride Event

END_OF_DOCUMENT_TOKEN_TO_BE_REPLACED

We Shouldn’t Have to Wait for Clinton to End Trans Detention, Obama Can Do it Now

The blog post below is by Jorge Gutierrez, National Coordinator of FAMILIA TQLM.

Yesterday Hillary Clinton spoke about immigration during a roundtable with young people in Nevada. It is no coincidence or surprise that the topic of immigration is at the forefront of her presidential campaign given the organizing power many grassroots immigrant rights organizations have been building for the last several years. We know that while the courts deal with the injunction of DAPA and extended DACA, our undocumented immigrant communities continue to be detained and deported. Private corporations continue to build detention centers, fill 34,000 beds with our people every year, and profit at the cost of the suffering of our undocumented community. We also know that LGBTQ undocumented immigrants, especially transgender women, continue to be detained, tortured and deported by Immigration Customs Enforcement (ICE).

Take the case of Nicoll Hernandez-Polanco, a 24 year old transgender undocumented woman, from Guatemala that spent 6 months in a detention center in Florence, Arizona. Nicoll was placed in all male facility; her gender identity was not respected and she experienced sexual and physical abuse. She was recently released after months of a public campaign. And her case is only one of many transgender undocumented women in detention centers who continue to experience abuse and torture.

END_OF_DOCUMENT_TOKEN_TO_BE_REPLACED

Liberation, Not Deportation Rally in Santa Ana Calls for LGBTQ Community to Challenge Deportations and City to Cut Contract with ICE 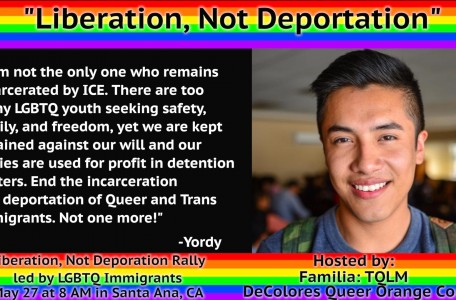 LGBTQ immigrants and allies from across the country will converge with FAMILIA: Trans Queer Liberation Movement (FAMILIA: TQLM), DeColores Queer Orange County, and other community groups to proclaim “liberation, not deportation,” denounce the deportations separating families and communities, and call on Santa Ana to terminate its contract with ICE to imprison trans detainees at the Santa Ana City Jail. Read more
Search the Blog
Video: Accompany the Struggle to Say No More Deportations
Click to Stop their Deportations